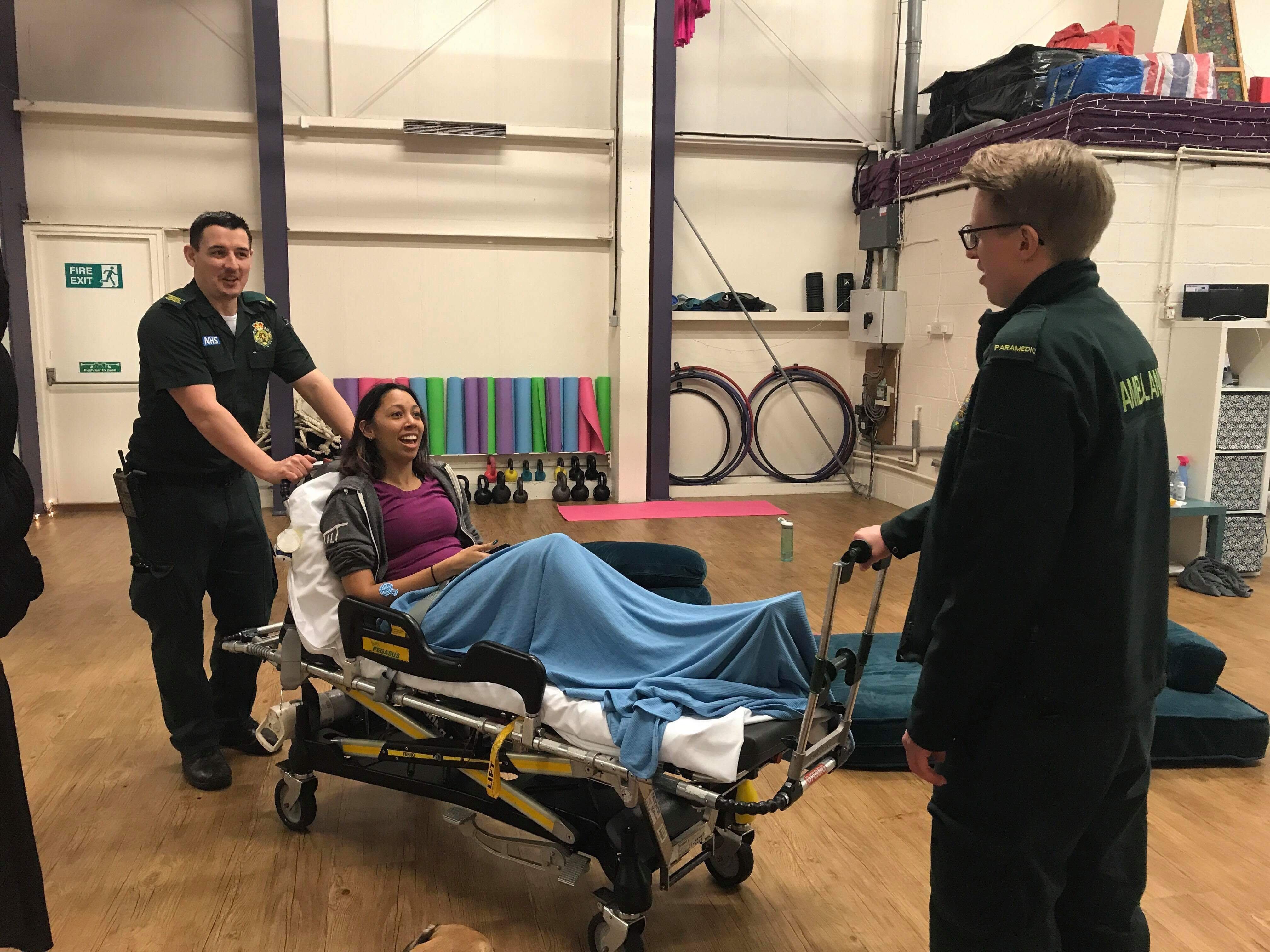 So… I dislocated my kneecap…

Nine weeks ago, I dislocated my kneecap. Before you jump to conclusions, this did not happen on the pole. This happened doing a lunge. Yes, you read that right, a LUNGE on the floor. It was severe enough for the studio to call an ambulance, and for me to be in crutches for supposedly six weeks. Six weeks of no pole, you’ve got to be joking. Not when I had my first performance in fifteen years, only seven days away. Fuck your six weeks… I’ve got a showcase to do.

If any of you have ever dislocated a joint, specifically your kneecap, you will know how especially painful this one is; because that muthaf*cker migrates. Yeah, your body knows you’ve seriously hurt yourself and it’s in critical panic survival mode in case a lion attacks you… so it’s going to fix itself, regardless of how you feel about that.

So how did it happen? I was doing a regular ole lunge, and I suddenly could not move my leg. No pain, no pull in my leg, no classically gross popping sound, nothing. My kneecap just gracefully glided two inches to the outside of the socket, on the side of my knee, like an experienced ballerina. It looked as disgusting as you’re imagining it right now. I told the instructor that I needed some spotting getting my butt to the floor, because I was in lunge position so my right leg was bent holding all my weight, and I was not moving that knee, at all.

Once I was on the ground, I was able to assess how bad it really was. It warranted an ambulance call, and a summoning to the two resident physiotherapists at our studio. Classically, the ambulance did not consider this an emergency (it’s not like I’ve lost use of an organ or something) and said it could take up to five hours… Five hours of my left knee pinned to the floor, and my right leg folded and pinned under my chest in a deformed-looking pigeon pose… Yeah… no.

As soon as I started not looking too great and my leg decided to spasm uncontrollably, the amazing studio physios decided to trick me to get onto my back so that with that motion they could get me to straighten my leg, thus allowing them to relocate the bane of my life back to whence it came. I’ve felt pain before. My pain tolerance is legendary. I was screaming. Hysterically. I think anyone who was there that night needed some therapy from hearing that… Gods know I did.

About ten minutes later, the ambulance strolled in. Right on time, as usual <rolls eyes>. They assessed the situation, strapped me up, gassed me up and took me to the hospital’s A&E, where I spent the next four hours waiting on a splint. The radiologist who took my X-ray tried to get me to pivot my strapped knee 90º to the left so she could get a better shot without having to actually do anything. She very nearly got a horse kick to face when she thought that physically moving it herself was going to work. Oh, the pain… It left me wondering how much radiologists actually use their brains; or if somehow, the radiation they are exposed to removes all common sense. The leg was strapped straight for a reason; it was dislocated, and needed to remain straight for the next few days, at the very least. Why on earth would you try to get me to bend it or twist it so that you don’t have to move the x-ray machine around?

This happened on a Wednesday night, so I booked Thursday and Friday off as holidays. Nice mini-vacation; yay me! I was so bored. I left my laptop at the office because I figured if I was just lugging it home to lug it back to the office the next day, that didn’t make sense. So I didn’t have any work to do and nothing to really take my mind off of being bored. I eventually gave up after 24 hours and went outside to do some yoga in the garden and enjoy the sun and keep my body limber; well, kinda limber.

By Friday afternoon, I was getting cabin fever. My car was still at the studio, so I told my brother drop me there and I’ll stop in for some performance training quickly and then come home. Yes, this was not 48 hours since the “incident” and I was back in the studio with one crutch and my splint on. Most people were quite surprised that I was even able to walk, far less come to studio to do pole things. But I’d wager there were a fair few people who were not exactly happy about me being there… post-injury and all… I managed to get about 30 minutes of routine in, while adjusting to compensate for my knee issue. I was determined to do this performance.

Back to “Normal” Life

I practically bounced into work on Monday morning; bright and early, for a change. (I’m notoriously 15 minutes late for everything right now.) Throughout the day, the challenge was getting comfortable. This became worse as the week edged on, and by Wednesday, I started wearing the soft brace I bought while I was at my desk, rather than the metal one from the hospital. It helped the agony happening in my lower back and hips a lot. Getting comfortable in an office setting was definitely challenging, and probably was the biggest distraction that week. I ended up on several occasions just laying flat or pulling my knees up into a foetal position on the floor in an empty office just to release the pressure off my spine. That’s the worst thing about these sorts of injuries… you can’t get comfortable unless you’re lying down, and you can’t lie down in an office.

Training for the Showcase

When you have a knee injury, you can’t climb up a pole, you can’t do hang backs, and you most certainly can’t twirl on the bad leg. So, most of my routine needed to be changed if I still wanted to perform. I decided to make the changes with the splint on, so that I could comfortably perform with a splint, in case I needed to, and to make sure that if I could dance with that on, then I most certainly will be able to dance without it. The pole adjustments were harder, since I had a static pole at home, and the performance was a spinny one, and trying to think in studio was harder than I anticipated. On the day of the performance… hours before… I changed the pole flows completely. Crazy I know. The first time I did those flows were on stage… The performance went really well on the day, and while it was quite possibly my worst performance ever, it got the ball rolling. Achievement Unlocked. You can watch the shittiest performance in my life, here: https://youtu.be/BHdx61bKbWs

Overall, I think I’ve come a very long way with recovery, but honestly, this really knocked me down. There were nights that I’d cry myself to sleep just thinking that I’ll never really be able to pole dance or do anything I really wanted to do, but in the end I just wiped away those tears and pushed through. The proof is in the pudding guys; you have to go for your goals because no one will achieve them for you. And tomorrow is never promised, so pull your socks up, go out and smash it! Because I know you can, and so do you!

Writing takes time and effort. If you liked it, and want to see more of it, throw some cash in the pot. Every little bit counts!